U.S. Railroad Retirement Board
Labor Member of the Board 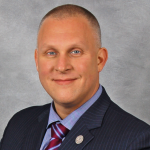 John Bragg was appointed Labor Member of the Board by President Trump in 2019. His appointment was confirmed by the Senate on January 2, and he was sworn into office on February 5. Mr. Bragg was appointed on the recommendation of 13 national railway labor organizations.

At the time of his appointment, he was a Vice President with the Brotherhood of Railroad Signalmen. In that capacity Mr. Bragg also served as a permanent member of the National Railroad Adjustment Board, which adjudicates workplace disputes between railroad workers and their employers. Before becoming a Vice President with the union, he also served as a Grand Lodge Representative and Director of Research.

Mr. Bragg had many family members work in the industry, and started his own railroad career 18 years ago with CSX Transportation, first as a freight conductor and later as a signalman. He became active in the signalmen’s union, working his way up to serve as Local Chairman and as a Trustee of the Northeast General Committee before moving to the national office.

To view and download PDF documents, you need the free Acrobat Reader. We recommend using the latest version. Viewers with visual disabilities can go to Adobe's Access Website for tools and information that will help make PDF files accessible.