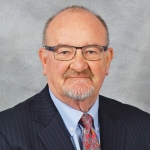 Erhard R. Chorlé was appointed Chairman of the Board by President Trump in 2019. His appointment was confirmed by the Senate on January 2, and he was sworn into office on February 6.

At the time of his appointment, Mr. Chorlé was a partner with the Chicago law firm of Pedersen & Houpt in its corporate and business counseling practice group. He started his legal career in Illinois state government, serving as a Senior Assistant to the Director of Labor, Deputy Secretary of State, and State Securities Commissioner. He also served as Chairman of the Illinois State Board of Investment, which oversaw $10 billion in investments for three state pension systems, and as Executive Assistant for Financial and Regulatory Affairs to former Governor Jim Edgar.

Mr. Chorlé received his B.S. degree in commerce from DePaul University (1978) and a juris doctorate from The John Marshall Law School (1984).

To view and download PDF documents, you need the free Acrobat Reader. We recommend using the latest version. Viewers with visual disabilities can go to Adobe's Access Website for tools and information that will help make PDF files accessible.